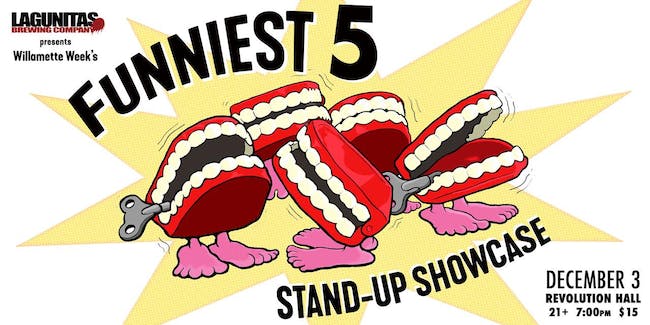 The funniest night in Portland comedy is upon us.

That’s not just our opinion. It’s a scientific fact.

Every year since 2013, WW has polled Portland’s comedy insiders—more than 100 comedians, club owners, show producers, podcasters and other comedy fanatics—to find the freshest, funniest faces in the local standup scene. Then, we take the top five vote-getters, put them on the cover, and gather them all on the same stage for our annual Funniest Five Showcase.

If there's anything that connects this year's winners, it's that each will make you laugh in ways you would never expect.

Headliner Ben Harkins uses everything from pizza to the mating habits of pandas to explore the anxieties of modern life. Dylan Carlino divulges family secrets onstage and has no problem digging into some seriously dark subjects.

Chris Johnson turns Portland's proclivities on their heads, while Hunter Donaldson spins his childhood in rural Arkansas into jokes about "ghost kink" and his parents winning the lottery, which is 100 percent true. And Lance Edward? He could tell your mother dirty joke and have her crying with laughter.

But the showcase not just your best chance to see the most hilarious new voices in Portland—it’s an early peek at comedy’s future stars. Past performers such as Amy Miller, Mohanad Elshieky, Bri Pruett and Curtis Cook have gone on to do big things on the national stage.

That’s all to say, you’re going to want to be there. Otherwise, you won’t know what everyone is laughing about tomorrow.