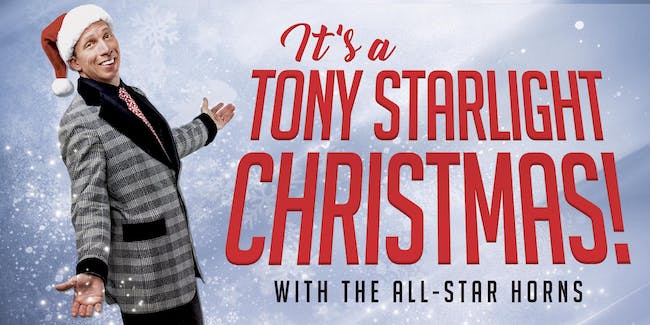 Tony Starlight: Christmas With the All-Star Horns - Tony Starlight's Christmas shows are a Portland holiday tradition. Since the first show in 1994 at the Space Room, to the series of sold out shows he performs at Tony Starlight Showroom each December, Tony and cast have been uplifting spirits with a show that is both silly and sweet. For this 25th Anniversary year Tony wanted to do something on a much grander scale. This bigger and brighter show needed a venue like Revolution Hall to contain it. Tony's Christmas show is a throw back to the classic TV variety shows. Through music, comedic monologues and sketches, Tony embodies the spirit of Dean Martin, Bing Crosby, Louis Armstrong and Neil Diamond. Holiday favorites with new lyrics designed to skewer Millennial culture (and the Gen Xers that unwittingly created it!) Impressions of beloved characters from The Rankin & Bass Christmas specials like the Burgermeister Meisterburger from "The Year Without A Santa Claus" and Jimmy Durante from "Frosty The Snowman". After 25 years of Christmas shows this marks the first time the show will be performed with the All-Star Horns. Long-time fans of Tony's show will be happy to hear their favorite routines performed by this amazing band AND to hear many new songs and routines, designed especially for this one-time performance at Revolution Hall.