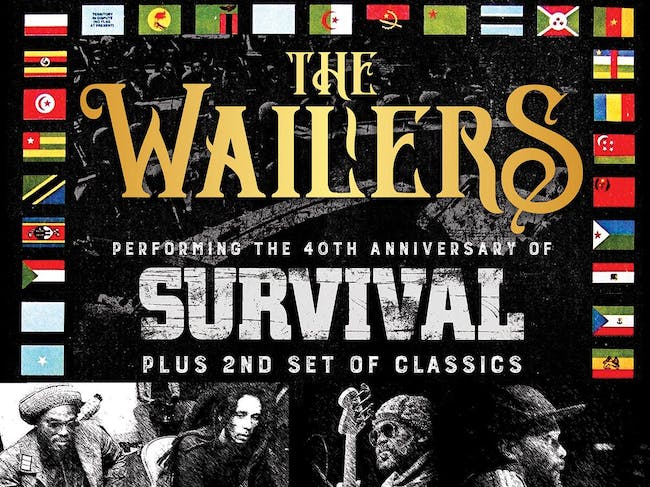 PERFORMING THE 40TH ANNIVERSARY OF SURVIVAL, PLUS A 2ND SET OF CLASSICS.

The legendary Wailers band is carrying its revolutionary sound and message to loyal fans around the world. Steered by famed bassist and founder Aston “Familyman” Barrett, and joined in solidarity with original Wailers’ band members, The Wailers are on the brink of musical history!

This Wailers band promises to deliver music and talent perfected over numerous decades. Old-school members welcome the new-generation talent of drummer Aston Barrett Jr., Fams’ multi-talented son and nephew of Wailers co-founder and innovative drummer Carlton “Carly” Barrett. Familyman Barrett is heralded as a musical genius, was named as one of the most influential bass players of all times, and received the 2012 Lifetime Achievement Award from Bass Player magazine.

Since 1974, Bob Marley & The Wailers have recorded, toured, and performed before millions of fans in multiple countries. They have claim to more than two hundred and fifty million Bob Marley & The Wailers records sold since the early 70s, including 1977’s Exodus, declared Best Album of the Century in 1999 by Time Magazine. The BBC named “One Love” Song of the Millennium that same year. The New York Times named Bob Marley the most significant musician of the century, and Rolling Stone magazine name Bob Marley & The Wailers Band of the Year in1976. All of these accolades were made possible with the Wailers band creation of and participation in timeless, distinctive music; intricate arrangements, and lyrics that touched fans everywhere. The incomparable Wailers are coming together, to perform on stage, and this is a slice of musical history you must not miss.