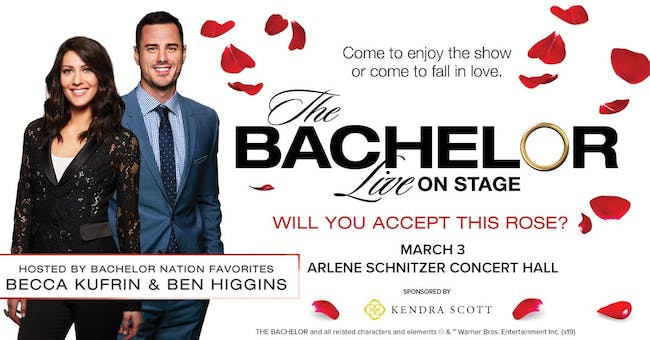 The Bachelor Live On Stage

Guided by your hosts, Ben Higgins and Becca Kufrin, our local Bachelor will get his first impression of 10 sensational women and from there, through a series of fun challenges, the women will showcase their personalities and how compatible they are (or aren’t) with our local gent. There are going to be rose ceremonies after each challenge that the AUDIENCE (yes, YOU) will have a say in who moves on and who leaves the “mansion”. The night is filled with comedy, fun, a bit of drama and in all seriousness, a hope for a potential romance after the final rose has been given with an amazing price package for the last woman standing.

Your hosts have an insider perspective to what life is really like at the mansion – and they are going to be sharing all those details with you… plus some really amazing choreography!!

Don’t miss this interactive evening with everything you know and love from the hit TV show but LIVE ON STAGE. This won’t air LIVE on tv, you have to have a seat to be a part of the journey. 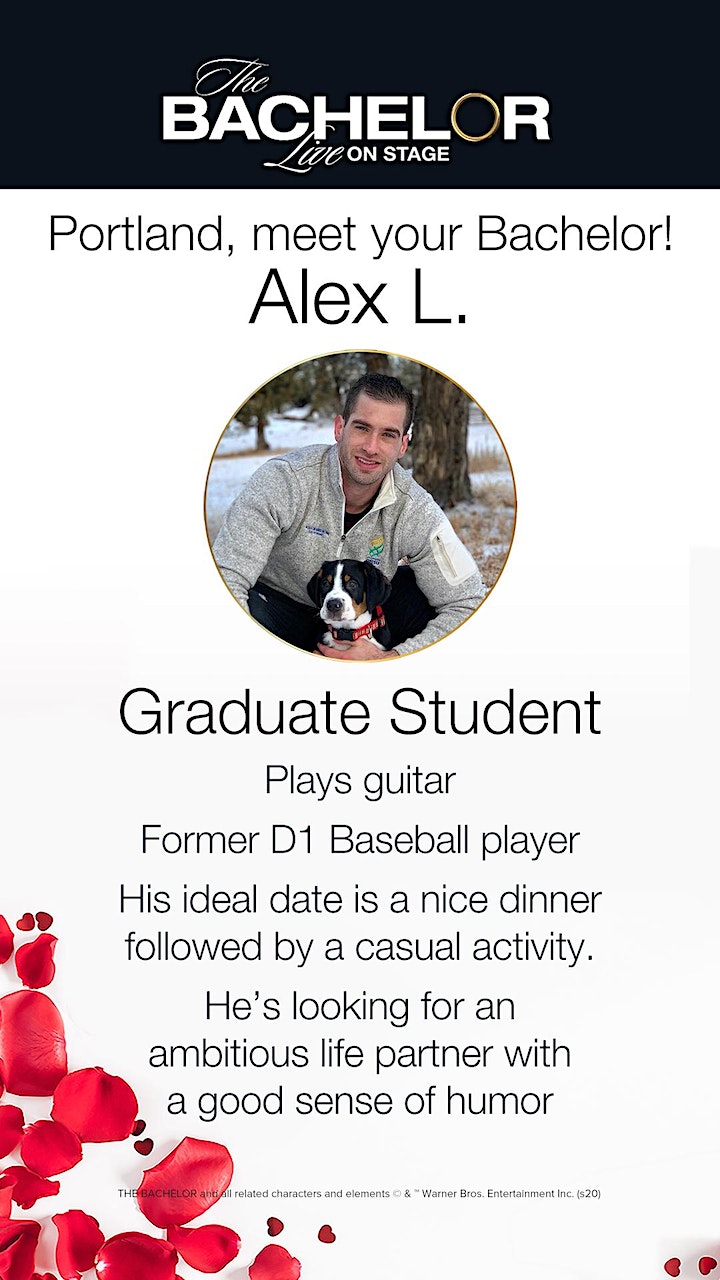 Alexander Levin is a former D1 baseball player who traded the baseball glove for a stethoscope. He’s currently pursuing his MD and fulfilling his passion for helping others. When he’s not studying he enjoys reading, playing golf, and guitar. He’s feels The Bachelor Live On Stage is a unique oppotunity that could help him find the one!

His ideal date is a nice dinner followed by a casual activity.

He’s looking for an ambitious life-partner with a good sense of humor.

The nationwide tour – which kicks off February 13, 2020, in Mesa, Arizona and will play in 66 cities including New York City, Los Angeles, Chicago, Philadelphia and Atlanta – brings the most successful romance reality series in the history of television to your hometown to help you find love. The Bachelor Live on Stage fits an entire season of “Bachelor” drama into one evening, giving members of the audience the opportunity to find love in their own community, complete with rose ceremonies.

Each stage show will introduce one lucky hometown bachelor to local ladies from the audience. Through a series of games, challenges, onstage dates and other fun getting-to-know-you scenarios, the Bachelor will hand the final rose to the woman he’s most compatible with.

And, for the first time ever, Bachelor Nation will have a say! Audience members will help along the journey by asking questions, making suggestions and cheering on the participants on stage. From the first impression rose to group date challenges and the coveted one-on-ones, the production gives fans the chance to watch live from their seats as the journey unfolds on stage.

It’s all the fun, flirting, drama and romance from your favorite TV show in one unforgettable evening! The Bachelor Live on Stage has something for every Bachelor fan, whether you’re looking to find love or have always wanted to get an exclusive peek behind the scenes of your favorite TV show.

The tour is the latest extension of the hit “Bachelor” franchise, which already includes “The Bachelorette” and “Bachelor in Paradise” spin-offs, all produced by Warner Horizon Unscripted Television. “The Bachelor” television series, currently airing its 24th season on ABC, airs in 31 countries around the world.

National tour presenting sponsor Kendra Scott will be bringing exciting surprises and experiences to Bachelor Nation on and off the live stage. Kendra Scott will be hosting a launch party with Ben and Becca, pre-show parties in their local stores, ticket giveaways, pop-up shops in select cities throughout the national tour, and ending with a finale party in Austin, Texas. Follow along on Kendra Scott’s social channels (@kendrascott) for more details and exclusive content from the tour.