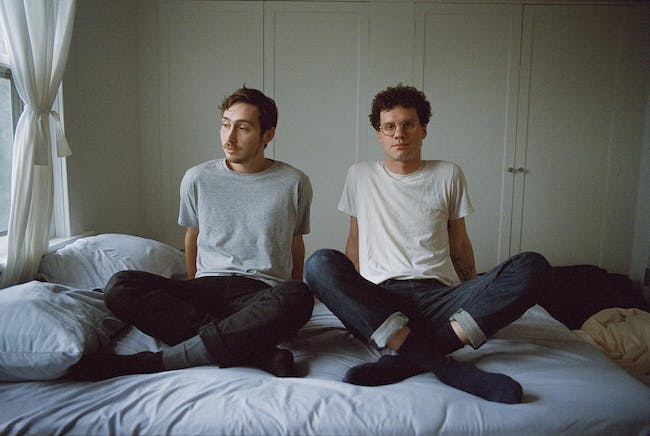 Minor Seating In Balcony Only / General Admission For 21+

Restlessness is at the heart of Whitney’s resonant and stunning sophomore album Forever Turned Around. As Julien Ehrlich and Max Kakacek realized over the past three years, life can change drastically. Priorities shift, relationships evolve, home can become far away, and even when luck momentarily works out, there’s still that underlying search for something better.

While the success of their 2016 debut Light Upon The Lake uprooted them away from Chicago to seemingly endless tours across the world, Ehrlich’s and Kakacek’s partnership only strengthened. “Our friendship has kept us going even though so much has happened in the years since we started the band,” says Ehrlich. Their bond has been the one constant as they’ve weathered the transitional period of their mid-twenties, supporting each other through bouts of heartache, loss, and uncertainty. But lately, as they’ve found home through themselves, their romantic relationships, and their friends, there’s an uneasiness that comes from stability. When Ehrlich sings on “Valleys (My Love),” “There’s fire burning in the trees / Maybe life is the way it seems” it’s a mission statement of the existential questions raised throughout.

This is what Forever Turned Around grapples with: the anxiety and acceptance that time is limited. Across 10 songs, Ehrlich and Kakacek skeptically yet masterfully navigate questions of mortality, doubt, love, and friendship in a grander scope than they’ve attempted before. It’s an album about partnership — romantic, familial and communal, but most importantly a love in friendship: the bonds between two best friends and creative partners and the joy and stress that comes with it. As Ehrlich sings on “Used To Be Lonely:” ‘Well it made no sense at all / Until you came along.” It tackles the blissful confusion that comes from seeing the way things unexpectedly change over time.

Forever Turned Around came together over several sessions across the country with its earliest material written during tour dates in Lisbon, Portugal. Though Ehrlich is Whitney’s lead singing drummer while Kakacek is the lead guitarist, when writing, both transcend their roles to piece together each offering lyrically and compositionally. “The way it ends up working is one of us comes up with a basic idea for a song and the other person serves as the foil to complicate that idea. We ask, ‘What can we change to make it more interesting?’” says Kakacek. Challenging each other is the core of their songwriting partnership. “A big thing for us is our ability to take criticism. We're always open to new ideas. We approach it where we try to stretch a new idea as far as it can go,” adds Kakacek.

After a session with producers Bradley Cook (Bon Iver, Hand Habits) and Jonathan Rado (Weyes Blood, Father John Misty) helped color in the arrangements, the album truly revealed itself when they reunited with original rhythm guitarist Ziyad Asrar in his basement Chicago studio—the same place where they hashed out much of Light Upon The Lake. “Getting down there was so important because we've always used that basement for music. The comfort and familiarity mattered but having Ziyad be a buffer between us was so helpful,” says Ehrlich. With Asrar’s help, songs like “Song For Ty” and “Forever Turned Around” effortlessly came together. There, the band enlisted Chicago musicians Lia Kohl and OHMME’s Macie Stewart to provide strings throughout the record and their lush swells colorfully accent the arrangements.

Risks and experiments make Forever Turned Around a triumph like opener “Giving Up.” The track started from a stream-of-conscious revelation when Ehrlich improvised the chorus while Kakacek played Wurlitzer. What began as a nod to Neil Young’s Live at Massey Hall 1971 in an afternoon turned into a heart-rending and relatable song about the ups and downs of long-term relationships. Over twinkling piano, Ehrlich sings, “Though we started losing touch / I’ve been hanging on because / You’re the only one I love.” He explains, “In a relationship, you don't stay at the same level at all times. You go through periods where you're closed off.”

Whitney has long been a full-fledged band with keyboardist Malcolm Brown, guitarist Print Choteau, bassist Josiah Marshall, and trumpeter Will Miller backing them live, along with Asrar who’s returning to the fold on their upcoming tour. On the album, the wider and more maximalist songs match the tight-knit chemistry of their electric performances thanks to Tucker Martine’s immaculate mixes. “We’ve become such a well toured band and developed this groove that you can hear it all over the LP," says Ehrlich. Though the stoner instrumental freakout “Rhododendron” is the most obvious example of this vibe, with its slinking guitar leads and Miller’s flailing trumpet lines, other songs like “Before I Know It” evoke the breezy melancholy of Labi Siffre.

Forever Turned Around is an album about relationships. It deals with how they evolve or flounder and how loneliness can creep in unexpectedly. Penultimate track “Friend of Mine” captures this sentiment beautifully. The emotional centerpiece of the album, it builds to a crescendo during the chorus with Ehrlich singing of an old acquaintance,”While you’re drifting away / Like a cloud hanging over the pines.” Happiness can be fleeting but this album proves that even when it feels like time is turning on its head and there’s either a moment of clarity or crippling doubt, there’s still beauty in figuring it all out.

The Lamb was written during a time of intense paranoia after a home invasion, deaths of loved ones and general violence around me and my friends,” says Lillie West, the Chicago-based songwriter behind Lala Lala. “I started to frequently and vividly imagine the end of the world, often becoming too frightened to leave my house. This led me to spend a lot of time examining my relationships and the choices I’d made, often wondering if they were correct and/or kind.”

West initially started Lala Lala as a way to communicate things that she felt she could never say out loud. But on The Lamb, her sophomore LP and debut for Hardly Art, she has found strength in vulnerability. Through bracing hooks and sharp lyrics, the 24-year-old songwriter and guitarist illustrates a nuanced look on her own adulthood — her fraught insecurity, struggles with addiction, and the loss of several people close to her.

Originally from London, West moved with her family to Los Angeles, where she spent her teenage years, and later to Chicago, where she enrolled at the School of the Art Institute of Chicago. Inspired by those cities’ DIY music communities, she started Lala Lala as an outlet where she could process her new experiences, which often involved toxic relationships and partying around the city with beloved friends. The turbulence in West’s life throughout that period resulted in an abrasive but tender debut album, Sleepyhead (self-released, 2016). West decided to quit drinking, and she began booking her own DIY tours across the country. Sobriety provided her with a newfound sense of self and clarity, and she began writing the songs for The Lamb while also starting the process of re-learning how to live her life.

Across the album’s 12 tracks, West carefully examines the skeletons in her closet for the first time, hoping to capture honest snapshots of her past selves. Many of the songs show West asking herself agonizing questions about her life with a clever and hopeful curiosity. On the album’s first single and opening track, “Destroyer,” she reflects on feeling self-destructive and the delayed realization something in the past has irrevocably hurt you. In “Water Over Sex,” West laments her old precarious lifestyle, while trying to readjust to her newfound sobriety, and ”Copycat” confronts her feelings of alienation and boredom. “Some of this album is about being frustrated that everything is always repeating itself and being bored with your own feelings,” she explains. “‘Copycat’ in particular is about how everyone talks exactly the same on the Internet and how it sometimes feels futile to try and be yourself.”

The catalyst for the starkly titled “When You Die” came when West’s friend Jilian Medford of IAN SWEET texted about the band getting into a car accident. In the song, she grapples with her lack of control over certain things and the inevitable regrets that come with it. Though that experience served as the song’s initial inspiration, “When You Die” also reflects on a string of three months in 2017 when West experienced several close deaths. The spare and stunning album highlight “Dove” further explores this tragic string of events; West explains, “It is very plainly about the death of someone I loved a lot and the guilt I had, and still have, afterwards.”

After testing a handful of the new songs while on the road, The Lamb’s final form came together while recording at Rose Raft Studio in rural Illinois. Performed by West with Emily Kempf on bass/backup vocals and Ben Leach on drums, the musical arrangements of the album — blending post punk with dream pop influences that incorporate vibrant synths, a drum machine, and even saxophone — find a balance between light and dark, reinforcing these dynamic and intimate songs that will surely resonate.