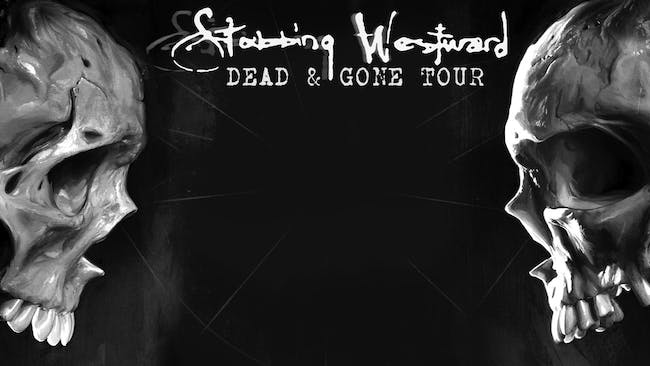 I Ya Toyah, All Good Things

iCal
Google
I Ya Toyah, All Good Things

Event Canceled - Stay Tuned For Updates. We will communicate the refunds process as soon as possible.

Blending the scathing electronics of underground industrial/rock with the emotive melodies of goth and a decidedly radio-friendly sensibility, Stabbing Westward rose to great heights in the mid ‘90s alternative boom. Formed in 1986 by Walter Flakus and Christopher Hall, the band went from underground cult sensation to the heights of critical and commercial success thanks to such songs as “Shame,” “Save Yourself,” “So Far Away” and “What Do I Have to Do?” – to this day, these songs remain anthems of heartache, dejection, rage, betrayal, and depression.

With two Gold albums and numerous hit singles, Stabbing Westward fell from grace with the 2001 self-titled album amid personal and professional turmoil, disbanding the following year and leaving a void in modern music that was somewhat filled by Hall’s later work in The Dreaming. However, it was the release of that band’s R​ ise Again​ in 2015 that the seeds were sown for a reunion – the album saw Flakus once again making music with Hall, with Stabbing Westward guitarist Mark Eliopulos joining The Dreaming onstage in Chicago for a set of past hits.

The next few years would see the band reunited for a series of anniversary tours and festival appearances, including several with the prominent charity ColdWaves event in 2016 and 2017. Hints of new material were sparse with a re-recording of one of the band’s earliest tracks, “Plastic Jesus,” along with new song “Home In You,” released on consecutive ColdWaves compilations, along with a digital re-release of the 1989 ​Iwo Jesus​ EP.

Now free from the shackles of mainstream or commercial expectations, one of the staples of mid ‘90s alternative music makes a triumphant return in 2020 as Stabbing Westward releases their first helping of new material in 18 years – the D​ ead and Gone​ EP – an ironic title as the band is neither dead nor gone. On the contrary, with three new tracks and two remixes, this musical offering showcases a revitalized and reinvigorated spirit that finds the band performing at the same heights of intensity that made Stabbing Westward a success two-plus decades ago.

Never a band content to rest on the laurels of the past, the current lineup for Stabbing Westward presents the best of both worlds as founding members Christopher Hall and Walter Flakus are now joined by longtime bandmate Carlton Bost (Orgy, Deadsy, The Dreaming), and new drummer Bobby Amaro (Orgy). The results on the ​Dead and Gone​ EP showcase a more streamlined approach – a leaner, meaner band that plays by no rules but their own. “We wanted to capture the sound that we never got to go for during the successful years of the band,” Hall states, “We aren’t concerned about radio singles or MTV or fitting into a genre. We really wanted to enjoy the freedom of being able to write music for us.” This new autonomy shines in the seething urgency of “Dead and Gone,” the darkly atmospheric and dreamy “Crawl,” and the riveting dancefloor fury of “Cold,” with additional remixes by Walter Flakus and Steven Archer (Stoneburner), and featuring haunting artwork by David Seidman. Written and produced by Flakus and Hall over the course of the last three years, and recorded in multiple states and time zones, these new songs capture the very essence of the Stabbing Westward sound – penetrating electronic rhythms, riffs that crush as well as groove, lyrics that are as despairing as they are anthemic, and vocals that reach right through to the listener’s heart and soul – topped off with a fresh and modern polish that is sure to please fans, attracting the new and appeasing the old.

Dead and Gone​ will be released digitally on January 3, with a physical CD edition to follow shortly after... but that’s not all, for D​ ead and Gone​ is but the first of three planned EPs that Stabbing Westward will be releasing over the course of the next year, with the end goal to be the release of a full-length album by the end of 2020!

With ​Dead and Gone,​ Stabbing Westward once again provides a virulent and vibrant soundtrack for those unable to face the cruelty and bitterness of an uncaring world, for those who ask, “How can I go on when my last hope is dead and gone?”

Get ready, for this is only the beginning!

I Ya Toyah landed here to spread the disease of music and infect the human race. She is a one woman army that blends the chaos and balance with familiar vibe of industrial electronica sound. Her music is a fusion of smooth, cutting edge vocals, surreal guitars, hypnotizing beats and multiple electronic synth elements arising into dark arrangements that, combined with storytelling lyrics, respond to the paranoia of everyday reality.

From an early life, ​her connection to the world of sound was undeniable. Always hungry to study versatile instruments and vocal techniques, she didn’t let the personal tale of struggle defeat her. Born and raised in Poland’s tough reality, she migrated to the USA as a young adult to seek a better life and musical fulfillment. Through the wins and failures of several artistic collaborations she soon developed the diverse knowledge and vision needed to accomplish what was perceived as a mission impossible- a one woman show unveiling her talents and empowering the audience with the message of strength and independence of a solo artist. The meaning behind the name I Ya Toyah sustains these values- when spoken out loud, in Polish it means It’s Just Me. Her logo art emerging from peace and anarchy symbols highlights the rebel psyche - I Ya Toyah’s true nature.

Code Blue- I Ya Toyah’s self written, recorded and produced debut album- was released on October 26th, 2018 and got immediate recognition in the music industry and stellar reviews from top industrial electronic magazines in USA, Europe, Australia and South America including Brutal Resonance, Sideline Magazine, Regen Mag, Pure Gain Audio, RocknLoad Mag, Spill Magazine, The Independent Voice, Crossfire Metal and more. I Ya Toyah was featured on several blogs and podcasts, including MK Ultra, Infectious Unease, Dark Life Experience, Decay Mag, Madness To Creation, System Failure, Revel Rousers, Uncivil Revolt and more. Album songs frequently appeared on ​WKQX - Chicago's legendary Q 101 radio station, WRIR, Rock Rage Radio, Flatlines Radio and Dark Essence Radio. Additionally, they became part of several prominent compilations, including Another Year Not Dead by Brutal Resonance and Mixtape by Modular Records UK. Code Blue album focuses on mental health and suicide prevention, with 15% of proceeds going to AFSP. I Ya Toyah herself is strongly involved in the cause and advocates the importance of mental wellness and ending the stigma.

I Ya Toyah’s live show is a mind-changing experience bringing a mix of captivating sounds and consciousness-expanding visuals, wrapped together by atmospheric finish of pulsating lights and engaging performance of one woman army taking control over multiple instruments and...the spectators. Within the year following an album release she showcased her talent in multiple cities playing concerts in legendary venues such as Warehouse (La Crosse), The Forge (Joliet), Club Anything (Milwaukee), Chop Shop (Chicago), Granada Theater (Dallas), Elysium (Austin), The Masquerade- Hell ( Atlanta), Soundstage ( Baltimore), Reggies ( Chicago), recordBar ( KCMO), Thalia Hall ( Chicago) and more, and sharing the stage with Mortiis, Grendel, Adoration Destroyed, Cyanotic, Conformco, Zwaremachine and many others. She wrapped her year touring with Pigface and promoting Code Blue album across the USA. She also recently became a part of industrial rock supergroup- The Joy Thieves- members include current, former, and touring members of Ministry, Revolting Cocks, Pigface, Marilyn Manson, Stabbing Westward, Skatenigs, Mary's Window, My Life With the Thrill Kill Kult, Blue October, W.O.R.M., 16VOLT, and more. I Ya Toyah was also nominated to Subculture Shock: Listeners Choice- Best of 2019 and made top rankings next to artists such as KANGA, Twin Tribes, KMFDM, Rammstein and many more.

I Ya Toyah is currently finishing the remix project for the Code Blue album, including the collaboration with Rhys Fulber of Front Line Assembly and Conjure One, Tim Skold, Grendel and more. The release is scheduled for March 20th, 2020.