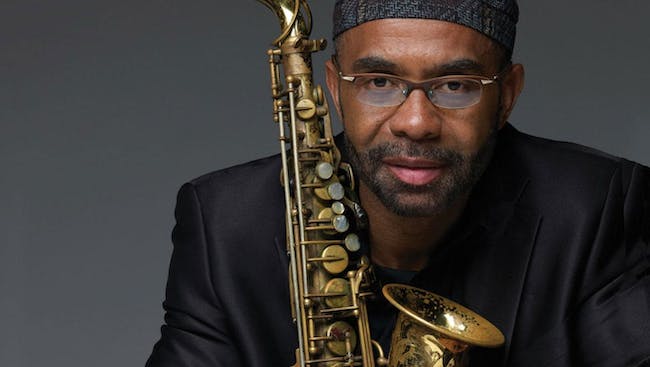 Detroit-born Kenny Garrett is a five-time Grammy® Award-nominee and 2010 GRAMMY® Award-winner (as a member of Chick Corea’s and John McLaughlin’s co-led Five Peace Band), and the recipient of an Honorary Doctorate from Berklee College of Music in 2011. His distinguished credits extend from starting with The Duke Ellington Orchestra (under son Mercer Ellington) to Freddie Hubbard, Woody Shaw, Donald Byrd and Miles Davis (with whom he ascended to international stardom) to contemporary stars Marcus Miller, Sting, MeShell NdegeOcello, Q-Tip and funkateers Cameo.

María Grand is a saxophonist, composer, educator, and vocalist. She moved to New York City in 2011. She has since become an important member of the city’s creative music scene, performing extensively in projects led by or including musicians such as Nicole Mitchell, Vijay Iyer, Craig Taborn, Mary Halvorson, Jen Shyu, Aaron Parks, Fay Victor, Joel Ross, etc.

María writes and performs her original compositions with her ensemble, DiaTribe; her debut EP “TetraWind” was picked as “one of the 2017’s best debuts” by the NYC Jazz Record and her full-length album Magdalena was praised by major publications such as the New York Times, Downbeat, JazzTimes, Billboard, JazzIz, and others. The New York Times calls her “an engrossing young tenor saxophonist with a zesty attack and a solid tonal range”, while Vijay Iyer says she is “a fantastic young saxophonist, virtuosic, conceptually daring, with a lush tone, a powerful vision, and a deepening emotional resonance.”

She is a recipient of the 2017 Jazz Gallery Residency Commission, the 2018 Roulette Jerome Foundation Commission, and the 2019 Roulette Residency. She was Best New Artist for the 2018 Extended Jazz Times Critics Poll; she was also nominated for the Jazz Journalist’s Association Up-And-Coming Musician of the Year 2018 and named the 2018 Newcomer Musician for the El Intruso 11th Annual Internation Critics Poll. As an activist in the performing arts, María is a founding member of anti-discrimination group, the We Have Voice Collective. María performs regularly with her own ensemble; she is also a member of Joel Ross’ Parables, has toured with Antoine Roney, as well as with RAJAS, led by Carnatic musician Rajna Swaminathan, and joined Mary Halvorson’s Code Girl in 2019.

She has toured Europe, the United States, and South America, playing in venues and festivals such as Dizzy's Club, the Jazz Gallery and the Stone in New York City, AngraJazz in Azores Islands, the Kimmel Center in Philadelphia, Roulette in Brooklyn, Porgy and Bess (Austria), Bird's Eyes (CH), MassMoca in New Hampshire, JazzJantar Festival in Poland, Le Guess Who Festival in Utrecht (Netherlands), etc...