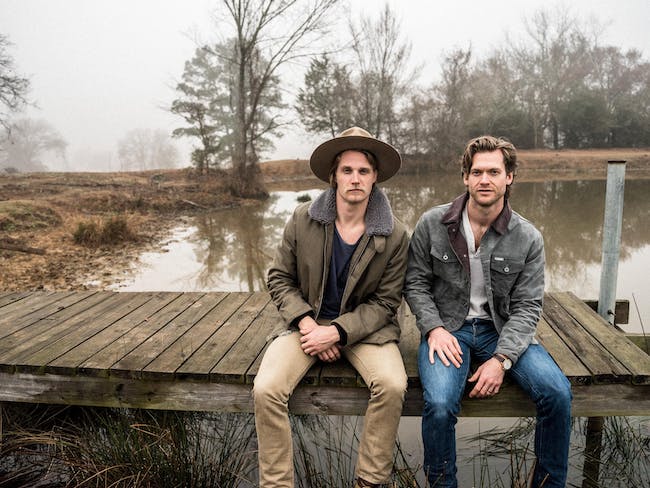 Reflecting the majestic landscape where it was recorded, Jamestown Revival’s new album San Isabel feels calm- ing, spacious, and most of all, natural. Led by Jonathan Clay and Zach Chance, the band embraced a minimalist ap- proach for these 11 tracks, recorded in a remote cabin in central Colorado. Each workday began with coffee on the front porch and a mountainous view of the San Isabel National Forest.

“We were out there probably 17 days. Everything just slows down,” Chance says. “We’d go into town to get food in the evenings, just to break it up, but most days when we were recording we would have the doors and the windows open, and the breeze going through it. It’s a small cabin so it’s cozy.”

“It’s got so much character. You walk into this place and it gives you a really cool feeling,” Clay adds. “The spirit of that mountain range is all over this record.”

Following four years of relentless touring, Jamestown Revival essentially disappeared in 2018, spending almost every day to-gether writing new material in their home base of Austin, Texas. Clay and Chance – who met as teenagers in the small town of Magnolia, Texas – set out to pursue their own musical vision, re-focusing on their roots.

“When we sat down to write this record, we asked our- selves, ‘What kind of record do we want to write?’” Clay recalls. “The first thing that came up in that conversation was, ‘Well, why did we even start Jamestown Revival

in the first place?’ It was because we enjoyed singing harmonies so much. So we decided to write a record built around that. That’s what we started doing this for. It’s re- ally as simple as that. To us, harmonies are the third man. It’s what makes a song feel complete.”

Most of the time, Clay takes lead vocal with Chance on high harmony, a striking blend that appears effortless. Yet, San Isabel occasionally flips that concept as Clay’s expressive baritone drifts beneath Chance’s pristine tenor lead. “It’s not about who’s singing the loudest or who’s the getting the voice with the most recognition. It’s about blending these voices together so it makes the most impact,” Chance says. “I grew up playing basketball and baseball, and in my mind, harmony is a team sport and it’s a sum of all the parts.”

For the first time ever, Jamestown Revival enlisted a co-producer, Jamie Mefford (Nathaniel Rateliff, Gregory Alan Isakov). Finding inspiration in ‘60s and early 70’s folk and pop, the original songs on San Isabel show a reverence for early John Denver and Bob Dylan, as well as Simon & Garfunkel and Crosby, Stills, Nash & Young. Nestled near the end of the album is a stunning reinter- pretation of the 1965 classic, “California Dreamin’.”

The low-key vibe of San Isabel harkens back to the duo’s first recording, Utah, a homemade project from 2014. After signing with a major label, the band expanded and re-released Utah, followed by 2016’s rock-oriented The Education of a Wandering Man. Building a fan base through grass roots support and AAA radio, Jamestown Revival has performed at iconic venues from the Ry- man Auditorium to Red Rocks Amphitheater as well as countless festivals such as Coachella, Austin City Limits, Stagecoach, Willie Nelson’s Fourth of July Picnic and more.

Chance says, “This record is different than our previ- ous two and it definitely has more of an ethereal thing. The heads and tails of the songs are longer, so it really is creating a trance. We love records that you can drive to, and hopefully this is one that you can take a road trip to. Jamie really helped bring that out. We would record and get the essentials, whether it be an acoustic guitar or an electric guitar. Then we would add what we started calling ‘celestial seasonings,’ where we would do these tracks with an ethereal vibe, which became an undercur- rent throughout the record.”

Indeed, listen closely to San Isabel and the sounds of songbirds, a booming tin roof, and even a package of flour tortillas (used as a snare drum) can be heard in the mix. A skilled woodworker, Clay also built a baritone lap steel guitar from a leftover piece of alder wood in order to capture a deep slide guitar groove. However, he didn’t get the instrument’s grounding quite right, meaning that Zach had to put one hand on the guitar jack and the other hand on his bandmate to eliminate the buzzing.

That obvious camaraderie is a big part of Jamestown Revival’s appeal. Clay and Chance have maintained a close friendship since they met at age 15, attending high school together in Magnolia, Texas. “People say they can see it and they can feel it,” Clay says. “I mean, we’ve been friends forever, it feels like. It’s a brotherhood. We don’t always like each other but we love each other, you know? We truly enjoy being able to do what we do, to make music and travel together.”

The band’s name evokes the beginnings of a new era by combining a reference to one of America’s first settle- ments (Jamestown, Virginia) with one of their favorite bands (Creedence Clearwater Revival). Now that San Isabel is complete, another revival is imminent.

“Especially when music is your job, if you’re not out playing shows and you don’t have these tangible things to show what you’re doing, it feels kind of intimidating,” Chance says. “But it is so essential to step away from that and reflect and to spend time working on it. Honing our craft is something I think we’ll always have to do, but in our humble little world, we have to chip away at it however we can. Stepping away like that is important to slow it down a little bit.”

Clay adds, “We wrote this record with sort of an overar- ching theme, which is cutting out the noise for a minute and maybe stepping away from social media, from the internet, and from the complicated, busy nature of most of our lives – and focusing on existing for a minute. If this record inspires people to do a little bit of that, then we would be really happy with that result.”