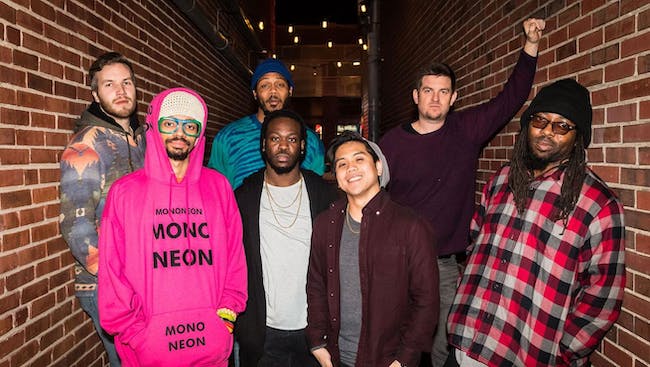 Headed by Snarky Puppy’s multi Grammy–winning percussion duo of Robert Sput Searight and Nate Werth, Ghost-Note is an explosion of sound. With an expansive roster of next-level musicians—representing members of Prince, Snoop Dogg, Erykah Badu, Herbie Hancock, Kendrick Lamar, Marcus Miller, Toto, Justin Timberlake, and more—the band is pushing funk music into the future, building on the uplifting, pioneering foundations laid out by the likes of James Brown and Sly & The Family Stone and infusing their fresh take with tastes of afrobeat, hip-hop, psychedelia, world folklore, and more.

Fearless, both in Swagism’s sonic depth and conscious social commentary, the band easily translates this adventurousness in a live setting. Ghost-Note’s live performances are bold and in your face, with the group offering up none of the tight-laced pretenses frequently associated with the band’s jazz roots. Focused on creating seductive dance-able grooves and a contagious feel-good energy, each show is an opportunity to let loose and connect, for both fans and the musicians alike.

After forming in 2015, Ghost-Note has already begun to take the world by storm. The group’s two studio albums—2018’s Swagism and 2015’s Fortified—have earned critical acclaim and popular success around the globe, with both albums hitting the #1 spot on the iTunes Jazz Charts. Furthermore, the ever-growing family of musicians has mounted successful headlining tours in the United States, Canada, and Japan and performed at high-profile international music festivals and events.

Starting in 2006, Liv caught the attention of Prince and was quickly brought in to be apart of Prince’s New Power Generation and vocalist for 3rdEyeGirl. In 2013, with Prince’s support, LiV refocused on her solo career and delivered another successful album called “The Unexpected” in 2014 which was executive produced by Prince. The album received rave reviews not only by critics but even wowed by Liv’s show stopping performance’s. Liv was featured on Jimmy Fallen, Jimmy Kimmel and David Letterman. The Letterman performance, he proclaimed,”Oh my God, thats unbelievable! Honestly, This is it! This is all you want!!” LiV was been nominated for three Soul Train Music Awards(Winning Best Contemporary Jazz Performance). LiV was also VH1’s “ You Oughta Know” Artist.

In the years following, Liv has toured extensively all over the world. She was seen opening for Prince, Lionel Richie, David Stewart, Cyndi Lauper, Heart and more. Liv is currently working with Rock n Roll Hall of Fame inductee, Nancy Wilson of Heart in a new band called Roadcase Royale. They released their debut album “ First Things First” Fall of 2017.

Liv’s unique ability to bring alternative should with a little bit of Rock n’ Roll to the stage is incredible to witness. Liv is now taking her powerful soulful voice to another level. Whether seen with a 10-piece horn section or an 82 piece orchestra even down to just guitar and a microphone, LiV Warfield is a voice you will not forget.