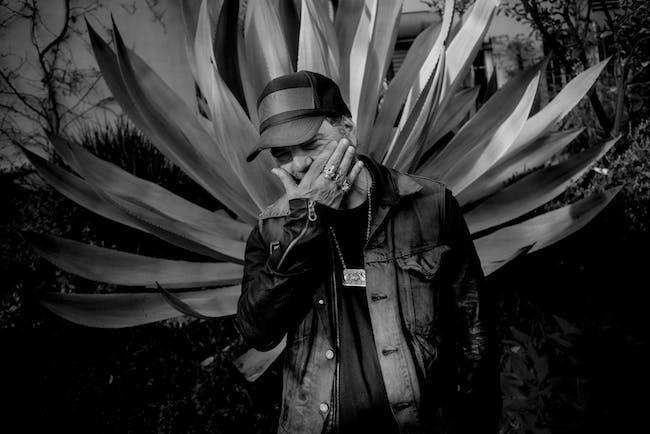 Daniel Lanois is a name that deserves to be mentioned alongside the finest sonic experimenters of the 20th century – and the 21st century too. Yes, he's been willing to step back into the background as others take the limelight, but that shouldn't diminish his contribution, which ripples throughout practically every style and sound of the modern era. Whatever you're listening to – whether it be acoustic or electronic, roots or futurist, underground or pop – if you listen closely you'll hear traces of the sonic signatures of Daniel Lanois. And what's more he's still experimenting as eagerly as he ever has. At a point when most musicians with anything resembling his level of success would be resting on their laurels and playing on old successes, he still has more hunger for the new than people a third his age, and as a result is creating music as beautiful and new as ever before.

Daniel grew up in Hull, Quebec, a town known best for gambling and drinking – “on the left side of the tracks” as he puts it. His family were not well off, but there was a strong musical foundation from the beginning: his father played fiddle, his mother sung, and there were regular family gatherings where live music was at the centre of things. “We didn't have money to go out,” he explains, “and there wasn't too much happening, so what we'd do is have get-togethers where everyone – uncles, aunts, anyone in the wider family – played music together, it was just what we did.” This put him at the heart of a living, breathing roots and folk music tradition, even as he was discovering his own tastes from the pop culture of the time. As his childhood went on, he soaked up Motown, R&B and rock'n'roll, then the psychedelic explosion, and by the time high school was approaching, he was already fixed on music as the only game worth pursuing.

Since his parents broke up – his mother took the kids away in the car and never looked back – he'd been pretty much allowed to run free, something he says “is the best upbringing you could ever have.” Allowed to follow his own desires, while Daniel was still in his teens, he and Bob set up a studio in the basement of their new home in Ontario, and music became a career before he could even complete school. He's never looked back since: from the very beginning, Daniel built a reputation with local musicians as someone who could work the studio but thought as a musician, and this steadily spread across Canada, as he moved to bigger premises and bigger jobs. The 1970s were spent as a journeyman producer, honing his technical skills – until towards the end of the decade, his reputation reached the ears of Brian Eno who recruited him to help with his Ambient series of albums.

The work they did on those albums together, and with musicians like keyboardist Harold Budd, has entered into legend. They perfected the idea of studio-as-instrument, making every part of the production an integral component of the overall texture, and striking the perfect balance between avant-garde experimentation and straightforward pleasure in sound that Daniel has continued to pursue in everything he's done since then. Daniel's well-grounded, no-nonsense approach to the studio proved to be the ideal counterpoint to Eno's cerebral flights of fancy – with common ground in their shared mischievous love of spontaneity. The Ambient albums reached a culmination in 1983's Apollo, in which Daniel's slide guitar glides through the soundscapes, evoking the weightlessness of space. These sounds have continued inspiring ambient and electronica experimenters ever since, from The KLF's epoch-defining Chill Out in 1990 through untold dancefloor and downbeat records right up to the present day.

And Daniel continued to experiment too. Though his connection with Eno would lead him onto working on some of the biggest selling records of the time, by megastars as big as U2 and Peter Gabriel, his approach in the studio was always as exploratory as when he was making the Ambient albums. Indeed, often this is what would make his productions so unique: there was never a formula, just a determination to find the right approach for the right artist. Working with Bob Dylan in 1987, for example, he brought out a Roland TR-808 drum machine to use as a compositional tool – kickstarting the groove of the Oh Mercy album, and helping make it one of the most dramatic creative reinventions in Dylan's career. A few years later, he and Eno helped bring the electronic music culture that they themselves had helped to inspire into U2's Achtung Baby.

This refusal to sit still, this constant hunger for new ideas and techniques, has defined Daniel's solo work too. Though his albums have been few and far between, every one has dug deep for inspiration and roamed widely in its sound and style: as much as someone who counts Lee “Scratch” Perry as a literal neighbour in Jamaica should. Whether exploring his French Canadian identity and folk heritage in bilingual songs or taking mainstream rock themes into outer space with manipulations as strange as any electronica, shoegaze or post-rock young guns were managing at the time, every record has a questing spirit to it. Most recently, he has hit a rich creative seam, and on the rhythmically complex Flesh and Machineand now on the gorgeous, weightless Goodbye to Language, he is going all the way with that experimentation. On both of these records he connects the most forward-looking instincts that constant contact with studio technology can develop with the natural rootedness that only a lifetime in music can give a person.

Goodbye to Language is the perfect joining of the dots, from the music as a constant background of his childhood, through the world-changing experiments of his early days with Eno, through his flights through the most rarefied atmospheres of the mainstream of music. Constructed entirely from the sounds of his pedal steel guitar, it's built with compositional rigour that recalls the 20th century dreamscapes of Ravel and Debussy, with a sense of sonic futurism and yet also with the naturalness that can only come from someone rooted in centuries of grassroots music. And while fusions of influence can sometimes lead to homogenisation in the blending of source material, this record does precisely the opposite: it's about highlighting the highest common factors from a lifetime of influences. Or as he succinctly puts it: “I operate under the banner of soul music – music that just feels right and comes from a truthful place.” When a musician with as much expertise and experience as Daniel tells their own personal truth, you should really listen closely.

“An appetite for the unknown” - Daniel Lanois No collaboration is unlikely when the end goals are the same. What started as mutual respect for one another s work, led to several years of a creative germination resulting in an eight-track full-length exploration released May 4th on Timesig/Planet Mu. The path began in 2014, after Lanois reached out to Venetian Snares (Aaron Funk) as a fan of his work. The project started to take root in Summer of 2016, after Funk hung around Toronto between shows. Taking his gear to Lanois studio, the two began to play for the first time together in what would prove to be a formative moment in their creative journey together. I love making music with Dan, he has a real understanding of how to create a world and build what may exist within that world. 'Venetian Snares x Daniel Lanois' travels to new zones in what Lanois describes as a body of work driven by exploration. Funk laid the groundwork with drums while Lanois rode the pedal steel, weaving their sounds together in a new sonic tapestry. The two ultimately landed at their destination, their work ready to be shared with those willing to explore.

Daniel is currently working in the studio on his next musical body of work - Heavy Sun.