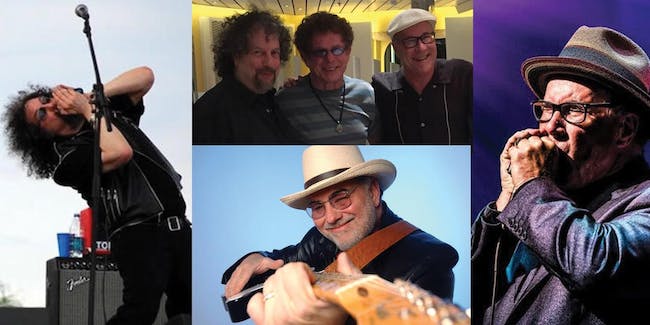 Sponsored by Lee Oskar Harmonicas (one of the largest harp manufacturers in the world!)

Magic Dick is the original harp man from the J. Geils Band, whose many hits flooded the airwaves during the 1970s and 1980s. Chart-toppers like "FreezeFrame", "Centerfold", "First I Look At The Purse", "Must a Got Lost", "Give It To Me" and Magic Dick's own "Wammer Jammer" were in the Top Ten off and on for 20 years and made them one of the few top bands (other than WAR) that featured a harmonica prominently in the frontline. Dick went on to start "Bluestime" with J. Geils after the original band broke up, making two CDs for Rounder Records. Dick is one of the most famed harp blowers on earth, partially because “Wammer Jammer” was played on Armed Forces Radio in Vietnam all thru the late 60s till the war ended. The first song most boomers tried to learn on harmonica, along with “Room To Move”.

Lee Oskar was born in Copenhagen, Denmark, moved to the States in the late sixties, and along with Eric Burdon, went on to become a founding member of a massively successful soul-funk-rock group that had hits like "Slippin Into Darkness", "Lowrider", "Cisco Kid", "World Is A Ghetto", "Spill The Wine", "Me And Baby Brother", and "Why Can't We Be Friends." All those songs and more were huge top ten records that got national airplay coast to coast and stayed high up in the charts for months. Oskar's unique approach to harmonica has earned him the distinction of being voted 1976's Instrumentalist Of The Year in three major music publications, Billboard, Cashbox and Record World. Oskar also recorded two solo records, “Lee Oskar” & “ Before The Rain” that made his name more famous. Lee is now performing as The Lowrider Band with old bandmates B.B. Dickerson, Harold Brown, Howard Scott & Oskar. Lee went on to start the Lee Oskar Harmonica company in 1983, which is second only to Hohner Harmonicas in popularity and sales. As of late R&B artist Pitbull has used Oskar’s music in his song “Timber”-Lee is credited on the track. Link:https://leeoskarmusic.com/

Duke Robillard born October 4, 1948 is an American guitarist and singer. He founded the band Roomful of Blues in 1967 and was a member of the Fabulous Thunderbirds. Although Robillard is best known as a rock and blues guitarist, he also plays jazz and swing. He played in bands as Mike "Honey Bear" Robillard and worked for the Guild Guitar Company. He spent over a decade with Roomful of Bluesbefore departing and becoming the guitarist for singer Robert Gordon and then a member of the Legendary Blues Band. He started the Duke Robillard Band in 1981, eventually adopting the name Duke Robillard and the Pleasure Kings, with whom he toured throughout the 1980s and recorded for Rounder Records. He became a member of the Fabulous Thunderbirds in 1990. He formed a duo with jazz guitarist Herb Ellis and the swing trio New Guitar Summit with Gerry Beaudoin and Jay Geils and even briefly in 2013, he was the guitarist for Bob Dylan's tour.

Jerry Portnoy was born in 1943 and grew up in the blues-rich atmosphere of Chicago's famous Maxwell Street Market during the golden age of Chicago Blues. He began his professional career in the late 60s and since that time has performed, live and on television, for millions of people around the world. During a career that includes six years as a member of the fabled Muddy Waters Blues Band, another six as leader of the Legendary Blues Band, four years at the head of his own band The Streamliners, and another four as a featured member of the Eric Clapton Band, his touring schedule has carried him to every state in the union and 28 foreign countries on six continents.