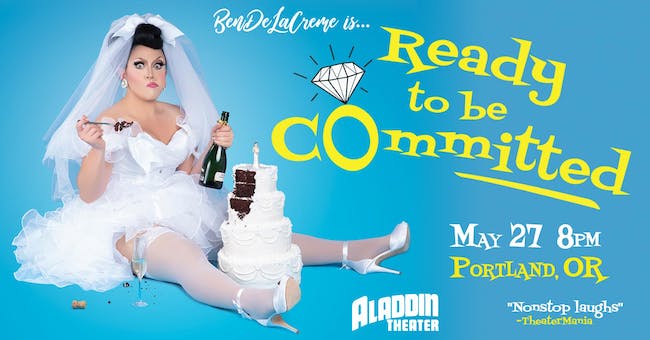 After years of people asking the aggressively effervescent queen if she “can please settle down,” BenDeLaCreme is finally ready to tie the knot in something besides her corset. Now all she needs is a potential spouse. And a dress. And a cake. And the ability to consider others.

Join the blushing bride as she tackles the pitfalls of love, marriage and romance. It’s a relay race to the altar as DeLa dodges pervy Grindr suiters, bitchy wedding cake toppers, and a visit from cupid himself in a limited engagement about the limitations of engagements. Written, directed, and produced by BenDeLaCreme, “BenDeLaCreme is...READY TO BE COMMITTED” showcases the superstar’s brilliance at its best, leading to sold-out residencies of the show in New York City and Provincetown in 2019.

Sweet as pie and sharp as cheddar, the Terminally Delightful BenDeLaCreme is known for combining her background in performing and visual arts with a love of spectacle, glamour, and Saturday morning cartoons. She has dazzled crowds throughout the Americas, Europe, and Australia, premiered four critically acclaimed solo shows off-broadway, as well as written, directed, and produced myriad narrative works and variety spectaculars that have played to sold-out audiences for over a decade.

BenDeLaCreme’s live performances have received glowing reviews. “Keeping you entertained while making you think about your place in the world is all a part of the BenDeLaCreme experience,” said Forbes and Billboard raves that her work “...soars past entertainment and into the realm of theatrical art.”

BenDeLaCreme has appeared on two seasons of the Emmy award-winning "RuPaul's Drag Race,” her first go-round securing her a spot among the show’s “15 Fan Favorites of All Time.” After being crowned “Miss Congeniality” on Season 6, she returned to compete on the third season of “RuPaul's Drag Race All Stars” on VH1 where she garnered more challenge wins than any other competitor in the show’s history, among other series records.

Continuing to break new ground by, and for, drag artists, in 2018 DeLa’s production company, BenDeLaCreme Presents, produced its first national tour with, “To Jesus, Thanks for Everything, Jinkx and DeLa!” And in 2019, the “All I Want for Christmas is Attention” tour marked DeLa’s first producer credit for an international tour.

“Keeping you entertained while making you think about your place in the world is all a part of the BenDeLaCreme experience.”

"[BenDeLaCreme is] uproariously funny as well as surreptitiously thought-provoking.”

“BenDeLaCreme’s storytelling ability is nothing short of brilliant.”

"Inspiring...I can't stop talking about ["Ready to be Committed!]"

"Spectacular… helping to redefine what cabaret can be: an intoxicating cocktail of high, low, topical, and timeless."